Adventures for The Shrike provide a level of detail between traditional gamebooks and oracle-based games such as The Quiet Year. You'll encounter people, places, and other prompts, but you'll also have the flexibility to build your own world and tell your own stories.

Want to focus on worldbuilding and speculative anthropology? Steampunk dogfights and scurrilous sky piracy? Cosmic horror at abominable altitudes? Tales of hope and care, exploring the ups and downs of the relationships of your crew? The Shrike invites you to tell all these stories and more.

This early access edition may still contain some glitches. All feedback is very welcome.

In order to download this game you must purchase it at or above the minimum price of $3 USD. You will get access to the following files:

Support this game at or above a special price point to receive something exclusive.

Some free copies are available for anyone who cannot comfortably afford to buy one.

If you want to speedrun a little like Eryn does, how about this?

* When you skip to Chapter Two, treat yourself to +1 resource for every two SPADES cards you discard.

* When you skip to Chapter Three, treat yourself to +1 resource for every four HEARTS AND DIAMONDS cards you discard.

* When you skip to Chapter Four, don't adjust any resources.

Also --  "There are more rules to how this final showdown works" -- here's the analysis. I'm actually really pleased with the way it worked out, because it created exactly one of those dilemmas I've tried to balance the game to generate ...

2) Arguably losing Nikolai counts as reducing a challenge by 2 - so by burning TECH 4 the Spades aspect is completed too.

The Semee Minnow could knock another 2 or 3 points off by taking some more damage. I can't remember how badly beat up the boat was by the end ... if it was totally undamaged it could knock off a full 5 points. But that still means at least one crew member (more likely two) would have to be sacrificed for a full win.

Sacrificing a crew member reduces the challenge by 2 and it can mean many different things in story terms. Often it may mean a crew member gets killed, but it doesn't *have* to mean that.

Instead Eryn judiciously chose to wrap it up with a mixed success / failure, rather than lose crew members. Completely valid, library in flames but not totally engulfed, Abe and Justine totally making out, etc. Great ending!

This looks really interesting! What makes some voyages designed for solo play and some designed for group play?

Hi - good question. It's mostly the wording of the storytelling prompts, e.g. the group play voyages say things like, "Go around in a circle, with each player making one suggestion." There's also a slight assumption that the solo voyage might be played more gradually over a longer period of time. But it's not a rigid distinction, and you could definitely play any voyage either as solo or group with a little interpretation.

This looks incredible. Can’t wait to dive into it! 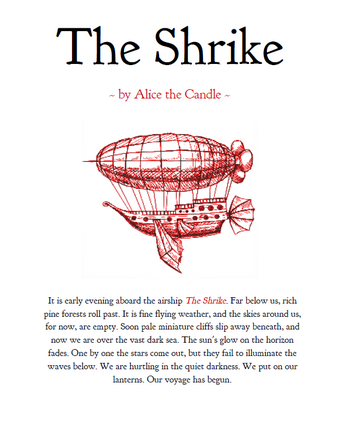 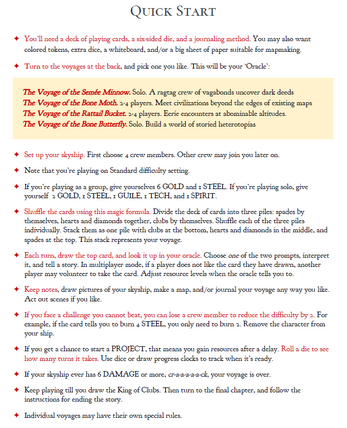 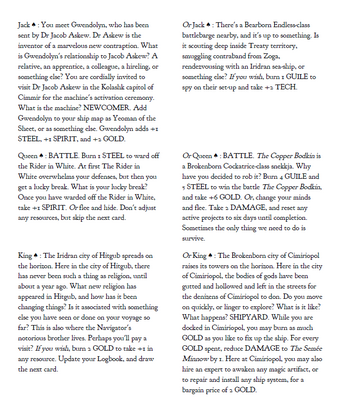